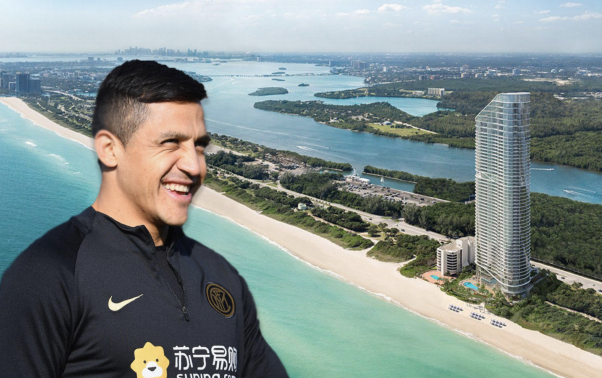 He paid $2.45M for a unit on the 26th floor of Ritz-Carlton Residences, Sunny Isles Beach

Sánchez, who plays for the Chilean national team and is on loan from Manchester
United, paid $2.45 million for unit 2604 at the Ritz-Carlton Residences, Sunny Isles Beach, at 15701 Collins Avenue, according to property records.

The 31-year-old forward, whose nickname is “El Niño Maravilla” (meaning the Wonder Child) is Chile’s all-time scorer with 43 goals. He was part of the team that reached the 2017 FIFA Confederations Cup. He also previously played for Barcelona.

At the Ritz-Carlton, he’ll have access to a private club level on the 33rd floor, a
beachfront restaurant, pool deck, kids club, full-service spa, fitness center and wellness
center.

The 212-unit, 52-story tower was developed by Fortune International Group and the Château Group and designed by architect Bernardo Fort-Brescia of Arquitectonica.

The development group declined to comment on the sale.

Fortune and Château secured a temporary certificate of occupancy in February, allowing the developers to start closings. In a TRD webinar earlier this month, Fortune President and CEO Edgardo Defortuna said the developers have paid their roughly $210 million construction loan down to about $50 million. More than 70 units have closed, according to property records.

Sánchez won’t be too far from soccer superstar Lionel Messi, who paid $5 million for a unit at Porsche Design Tower in Sunny Isles Beach last year. Sánchez played alongside Messi while at Barcelona.

As you may know by now, Tulum is an absolute natural paradise with beautiful beaches and jungle all around. One…
in Real estate Posted by Andrew
diciembre 21, 2020abril 7, 2021